The Velaris Residences is located at Bridgetowne Complex, Pasig City in Metro Manila.

The Velaris Residences Pasig promises to be the next iconic landmark near the central business district of Ortigas Center. With its exemplary architectural design and a facade that will mesmerize everyone who could see the wondrous edifice of the tower, Velaris will be one of its kinds to be located near the Ortigas Center in Pasig while also near Quezon City’s premier business districts (such as Libis, Eastwood City, Cubao, and the Triangle Park, among others). Additionally, just northeast of the site is the commercial center of Marikina while further southeast of the condo project will bring you closer to the progressive towns of Cainta and Taytay in Rizal Province.

The Velaris Residences Pasig is just 18km away from Manila’s domestic and international airports (NAIA Terminals in Pasay City). The homey ambiance of this well-thought-of residential development is truly a magnet for pristine living. The project is situated in a friendly neighborhood amid an atmosphere of dynamic living virtually conducive to vibrant families or young professionals wanting to have more in life. Other commercial areas, schools, churches, corporate offices, workplaces, restaurants, cinemas, leisure & entertainment centers, and big malls are just nearby and are mostly a few minutes away from your new home.

One of the major roads that surround the Cirrus (aside from C-5 and Ortigas Avenue) is Calle Industria, where some of Pasig’s corporate offices are located (such as D&L Industries, Inc., Mercury Drug Corp. Head Office, Eastwood City Cyber Park, Accenture Global One Central, Universal Robina Corp. MCD Plant, and EEI Corp., among others). 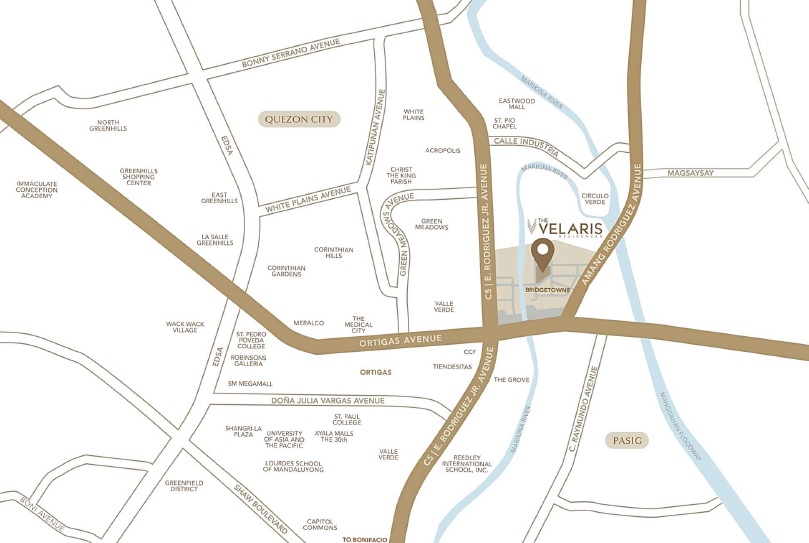